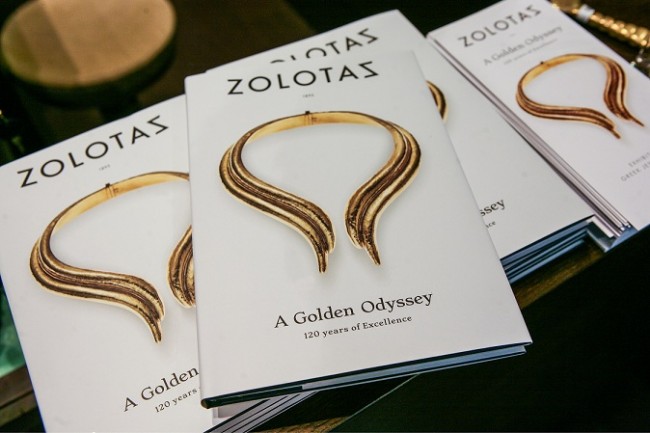 On Wednesday, June 10 2015, the ZOLOTAS House of Jewelry, which has paved a unique path in the history of Decoratives Arts since 1895, inaugurated the still open exhibition «A Golden Odyssey». As a resourceful Ulysses, ZOLOTAS has created a world where gold meets history through the revival of ancient Greek goldsmith techniques. Each jewelry collection represents another symbolism in the endless travel through the land of aesthetics.

In the early 1900s, Efthimios Zolotas follows his passion for jewels and gives life to his vision for a  House of unique jewelry. Thus, Aiolou Street in the city of Athens marks the beginning of his journey. His inspiration from the endless Greek cultural heritage, combined with his talent and knowledge, set the  foundation for the establishment of  ZOLOTAS name through time.

Xenophon Zolotas, Efthimios’ son and one of the most emblematic figures in Greece, achieves the revival of ancient Greek jewelry. That unique union of the Ancient Greek heritage with modern style makes ZOLOTAS trademark equal to that of the most famous French and American firms. From the Mycenaean and Byzantine civilization to nowadays, historical creations in gold are hand-crafted, which constitute a turning point in the Greek high jewelry making.

The uniqueness in the ZOLOTAS House philosophy attracts artists from various forms of art, such as Paloma Picasso and the sculptress Nisa Chevennement, who contribute to the House’s history by designing limited jewelry collections which take form and shape in the hands of the House’s goldsmith technicians.

The evolution of ZOLOTAS’ style is revealed through collections in white and yellow gold, embellished with diamonds and precious gems, which keep up with the contemporary designs and desires, marking at the same time the House’s faith in tradition, by drawing inspiration from the Greek mythology and architecture.

Today, with 120 years of history in the mythical art of goldsmithery, ZOLOTAS House continues with passion its mission: to innovate by creating “the unique”, to bring emotions to the surface thanks to the beauty of a rare object, to be the maker of tradition through time.